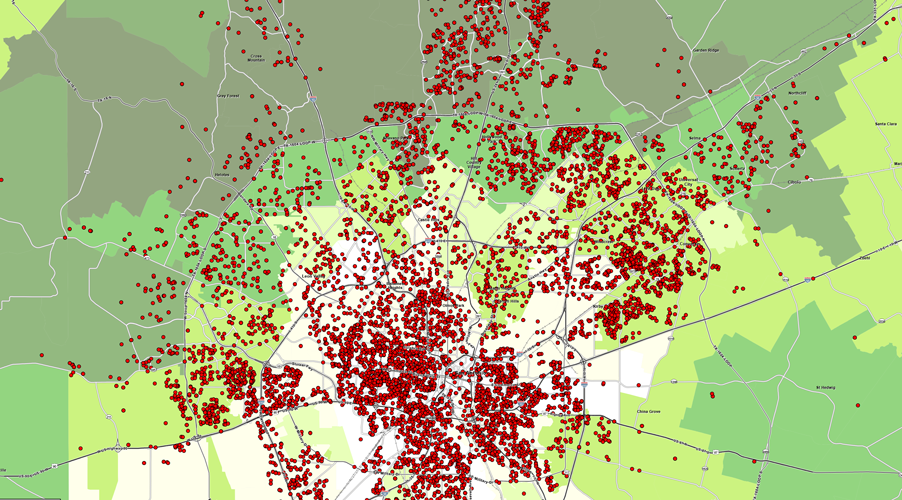 HOUSTON, Texas, January 30, 2017 – School choice nonprofit Families Empowered reports today that more than 13,000 San Antonio students were placed on a waitlist for a seat at a public charter school for the 2016-17 school year. This new analysis – which covers the students seeking a seat in a school at a Great Hearts, Harmony, IDEA and/or KIPP San Antonio public school networks – illustrates parent demand for school options in the Alamo city.

Families must submit applications in order to attend a public charter school, and students are admitted after selection via blind lottery.

For the 2016-2017 school year, a total of 20,604 applications were submitted to all four networks, by families hoping to find a seat in one of their schools. That represents 17,877 unique San Antonio children in total, for whom an application was submitted. Due to lack of room, the schools were unable to admit and placed 13,111 of those students on a waitlist.

“There is clear demand for public school choice options. Parents are willing to play the lottery and risk ending up on a waitlist to get access educational opportunity,” said Colleen Dippel, Families Empowered’s Founder and Executive Director.

“This year, Families Empowered added data from the IDEA Public Schools network, which is a key player in San Antonio’s school choice market. This gives us a more accurate picture of the scale of demand,” Dippel said.

“IDEA Public Schools’ San Antonio campuses continue to receive thousands more applications than seats available,” said Rolando Posada, Executive Director of IDEA San Antonio. “During the 2016-17 year, we added four more schools to our San Antonio network-IDEA Mays and IDEA Judson. During the 2017-18 year, will add six more-IDEA Brackenridge, IDEA Ewing Halsell, and IDEA Najim. Even with the growth of our network, there are still far too many students left without a seat. We are committed to continue our growth to meet the demand San Antonio families have shown.”

“IDEA Public Schools’ San Antonio campuses continue to receive thousands more applications than seats available,” said Rolando Posada, Executive Director of IDEA San Antonio. “During the 2016-17 year, we added four more schools to our San Antonio network-IDEA Mays and IDEA Judson. During the 2017-18 year, will add six more-IDEA Brackenridge, IDEA Ewing Halsell, and IDEA Najim. Even with the growth of our network, there are still far too many students left without a seat. We are committed to continue our growth to meet the demand San Antonio families have shown.”

“At KIPP San Antonio Public Schools, our goal is to prepare students for college and a choice-filled life. Last year we received over 5000 applications, but unfortunately we were not able to provide a seat for every student and family who was interested,” said Mark Larson, Founder and CEO of KIPP San Antonio Public Schools. “We have made significant progress in meeting the demands of underserved communities, however the lack of facilities funding is a substantial barrier to our growth.”

“As the number of Texas parents searching for better educational options grows each year, Harmony Public Schools has seen our waitlist surpass 30,000 applicants across the state. We’re honored to have the community’s trust and support, and we’re excited to be opening seven new campuses this year where we can provide more Texas students quality STEM education,” said Zekeriya Yuksel, Superintendent of Schools for Harmony Public Schools.

“We know today that 13,000 kids were left waiting across just four public charter school networks in San Antonio – that’s far too many. Texas should be working to create greater access to high-quality schools of choice for families. An education shouldn’t be decided by chance,” said Colleen Dippel.

Families Empowered serves all parents in need of assistance finding a school of their choice, including the thousands of families who were unable to find a spot in San Antonio’s four largest charter networks this year.

About Families Empowered
Families Empowered is Texas’ only non-profit organization dedicated to helping families choose the schools their children will attend. Families Empowered provides parents with tools, resources, and events to choose a school for their child. We introduce families to the diverse school options available to them; we do not advocate any schooling option over another. For more information, go to www.FamiliesEmpowered.org.

About IDEA Public Schools
IDEA Public Schools believes that each and every child can go to college. Since 2001, IDEA Public Schools has grown from a small school with 150 students to the fastest-growing network of tuition-free, Pre-K-12 public charter schools in the United States. IDEA was recently named America’s Best Charter School Network and boasts national rankings on The Washington Post and U.S. News & World Report’s top high schools lists. IDEA serves nearly 30,000 college-bound students in 51 schools across three Texas regions and is on-track to maintain its legacy of sending 100% of its graduates to college.

About Harmony Public Schools
Harmony Public Schools is a network of 48 high-performing K-12 college preparatory charter schools throughout Texas. Harmony blends the highest standards and expectations with a rigorous math- and science-centered curriculum and dedicated and engaged teachers and families to cultivate excellence and prepare students to succeed in college, careers and life. At Harmony Public Schools, we believe every child can succeed, and we are committed to helping them realize their full potential. To learn more about Harmony Public Schools and our 48 campuses across Texas, please visit: www.harmonytx.org, and follow us on Twitter at @HarmonyEdu and ‘Like’ us on Facebook: www.facebook.com/HarmonyTexas.